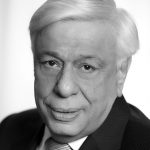 Prokopios Pavlopoulos has been President of the Hellenic Republic since 2015. He has had a active political career since the 1970s, when he was Secretary to the first (interim) President of the Republic, Michael Stassinopoulos. In 1996 he was elected Member of Parliament for the State for the New Democracy party, for whom he was later a Parliamentary spokesman. From 2000-2014 he was the Parliamentary representative for Central Athens and from 2004-2009 he served as Minister of the then integrated Ministry of the Interior. Pavlopoulos studied at Paris II University and Athens Law School, where he later became a professor.