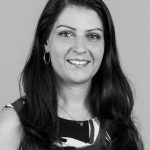 Muna Duzdar is a Member of the National Council in Austria, representing the Social Democratic Party. Previously, she was State Secretary for Public Service, Diversity and Digitalisation, Federal Government, a Member of the Vienna State Parliament and member of the Vienna Municipal Council. Duzdar is trained as a lawyer and in 2012, registered at the Austrian Bar Association. She holds a Master’s degree in International Law from the Sorbonne University, Paris and a Master of Laws Degree at the University of Vienna. Duzdar is primarily concerned with foreign policy, digitisation, integration and Austrian people´s advocate institution.