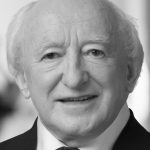 Michael D. Higgins has been the President of Ireland since 2011. Previously, he has served at almost every level of public life in Ireland, including as a member of the Irish Senate and as Ireland’s first Minister for Arts, Culture and the Gaeltacht. The first in his family to access higher education, he later lectured in political science and sociology at the National University of Ireland, Galway, and in the United States. Higgins has campaigned for human rights and for the promotion of peace and democracy in Ireland and in many other parts of the world, from Nicaragua and Chile to Cambodia, Iraq and Somalia. He is also a writer and poet.