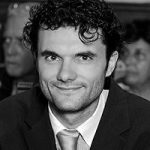 Matteo Biffoni is Mayor of Prato and the migration delegate at the National Association of Italian Municipalities (ANCI). He was elected city councillor in 2004, and again in the 2009 administrative elections. In December 2012 he entered parliament for the Democratic Party, and in 2013 was elected to the Chamber of Deputies. He resigned as a Member of Parliament in 2014, to launch his candidacy for mayor of Prato. In October of the same year he was elected president of the Province of Prato. Already responsible for ANCI’s immigration and integration policy, he was elected as President of ANCI Toscana in September 2015.