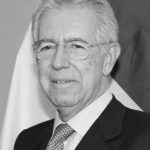 Mario Monti is President of Bocconi University. Since 2014 he has been Chairman of the High-level Group on Own Resources of the European Union. He was Prime Minister of Italy (2011-2013) and Minister of Economy and Finance (2011-2012). In 2011 he was appointed Senator for life by the President of the Italian Republic, Giorgio Napolitano. He served for ten years as a member of the European Commission, in charge of the Internal Market, Financial Services and Tax Policy (1995-1999), then of Competition (1999-2004). Born in Varese, Italy, in 1943, he graduated from Bocconi University and pursued graduate studies at Yale University.