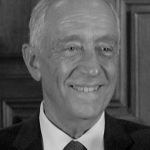 Marcelo Rebelo de Sousa has been President of the Portuguese Republic since 2016. Previously, he was Secretary of State for the Presidency of the Council of Ministers, Minister of Parliamentary Affairs, and a member of the Council of State. He was a founding member of the People’s Democratic Party (later the Social Democratic Party) and then its leader from 1996 to 1999. He was a member of the first Portuguese delegation to the European Council and Vice-President of the European People’s Party. He is a full professor at the University of Lisbon and founded the Portuguese newspapers “Expresso” and “Semanário”.