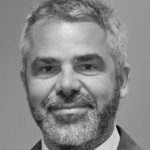 Leonardo Bassilichi is President of the Chamber of Commerce of Florence. In 1998 he became head of Operations Management of the family business, Bassilichi SpA. Later, in 2012, he was appointed CEO. From 2011-2015 Bassilichi was a member of the international organisation YPO, as well as being a member of the Board of Directors of the Florence Centre for Fashion. Between 2014 and 2015 he was a member of the Chamber Consortium Governing Council for Internationalization. Between 2011-2014 Bassilichi was Vice President of growth policies, industrial relations and security within Confindustria Florence (2011-2014).