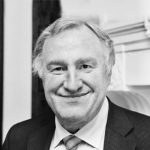 Karl-Heinz Lambertz was elected as President of the European Committee of the Regions (CoR) in 2017 after two and a half years as First Vice-President. He is a member of the Belgian Senate representing the German-Speaking Community. He has held numerous Ministerial posts in the German-speaking Community Government and was its Minister-President from 1999-2014. He was President of Parliament until 2016 before taking the post as Senator. Lambertz has been a CoR member since 2001 and since 2000, he has been a Member of the Congress of Local and Regional Authorities of the Council of Europe in which he is currently Vice-President.