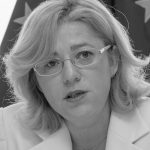 Corina Crețu has been the European Commissioner for Regional Policy since 2014, and a member of the presidency of the Party of European Socialists since 2011. She was an MEP from 2007-2014 and then Vice-president of the European Parliament in 2014. In Romania, she was the Vice-president of the Social Democratic Party of Romania, a Senator, and Spokesperson and Head of public communication of the Romanian President. Before she started her political career, she was a reporter and commentator for several Romanian newspapers. She graduated at the Faculty of Economic Planning and Cybernetics at the Academy of Economic Studies of Bucharest