Workshop: Stability of the Banking System

Introduction by Richard Portes, inaugural holder of the Tommaso Padoa-Schioppa Chair in European Economic and Monetary Integration at the EUI

Can the Refugee Crisis Make or Break Europe?

This panel discusses what is at stake in this dramatic refugee crisis and how Europe can manage it best and turn it into an opportunity despite the stark challenges that it poses. The refugee crisis of today is large and dramatic but is not unprecedented (see the Yugoslav wars in the early 1990s). The crisis is likely to have a mild positive economic effect (through increased consumption, plentiful and cheap labour force, increased funding/employment for reception and emergency aid) and a positive demographic effect (refugees are young people).  However, these will be largely offset by the costs (for supporting and integrating the newcomers) and job competition (between the newcomers and the disadvantaged natives). It may also exacerbate xenophobia and strengthen the far right parties across Europe. Contributors to this panel discuss the challenges that the crisis raise for Europe and how we can best deal with it.

Governance of Transatlantic Economic Relations: What Role for the TTIP?

The ongoing negotiations between the EU and the US on a Transatlantic Trade and Investment Partnership have led to substantial concerns and opposition by civil society, mostly in Europe. It is the most significant international economic cooperation enterprise in which the EU is presently engaged, given the deadlock and the absence of EU participation in the major initiatives centered on Asia (TPP, RCEP). Many EU citizens are concerned that the US will dominate rule setting in the TTIP and that the result will be an erosion of European standards and norms in areas ranging from food safety to environmental protection, prudential regulation of the financial sector to data privacy. US observers point to a mismatch between perceptions and the reality that US standards are frequently very similar if not more stringent than those in the EU, and that enforcement is often more effective—recent examples include the LIBOR and VW emissions scandals, both of which were uncovered by US regulators. Aside from policy areas that are of direct relevance to transatlantic economic exchange, the TTIP is also of concern to third countries, including developing economies. The EU and US argue that one goal of the TTIP is to establish rules of the game in areas that are not yet covered by the WTO or other global fora. An important example are rules for digital trade and associated cross-border data flows; another concerns rights and obligations of foreign investors. This roundtable will engage on these questions, providing contrasting views from experienced practitioners and leading academic scholars.

Disorder, Transition and Women in the Middle East

The panel will discuss the difficult political transitions and the state of war in many Middle Eastern countries. The failure of the Arab Spring has opened the way to radicalisation and transnational jihadism, growing violence and civil wars, return to authoritarianism and state repression of dissent. Political transformations and conflicts are often the result of deep societal changes but they also have an important and long lasting impact on women, children and civil societies. Prof. Heba Rauf, a well-known political scientist from Cairo University, will give her perspective on the toll of war and disintegration of states in the Arab world, looking comparatively at a few transitional or conflict countries and addressing critically the role of the EU in defending democratisation in the region.

This panel will consider some of the gendered dynamics shaping labour markets, social protection and social inequality in present-day Europe and locate those dynamics in a longer-term historical perspective. It will discuss evolving patterns of labour market access for women and young people; social inequalities in view of the “second demographic transition” (lower fertility across social classes, higher levels of education for women, higher levels of divorce among poorer couples); and the specific impact of the euro-crisis on women and their mobilizations in the face of the crisis. All of these questions will be placed in a longer-term perspective that considers the dynamic interactions between women’s uneven access to labour markets across 19th and 20th century Europe and the ways that women’s unequal access has been imbricated with highly gendered policies of social protection in the construction of European welfare states.

Leadership has been an elusive but ubiquitous phenomenon throughout human history in all societies. For much of global history, women were not present in formal leadership. In the 20th century, two waves of feminism, in the early part of the century and later from the 1960s onwards, challenged the absence of women from traditional arenas of male leadership. Women began to emerge as leaders in politics, business and other fields. However, the number of women in senior leadership positions remains small in relation to the population of women. This session will ask what are the remaining barriers to the emergence of more women leaders ? Are there particular barriers facing women in the global south? What interventions make a difference? Do women behave differently to men in leadership positions?

This roundtable will bring together academics and politicians to discuss populism in Europe. Is populism an ideology or a political strategy? Is populism, as usually assumed, always bad or can there be “good populism”? Is the current growth of populism a product of policies or politics? And is it more a European or a national problem? How do politicians experience populism? Are they victims or causes of populism? These are some of several questions to be addressed in this session and placed in the context of a broader debate regarding the current state of democracy in Europe.

Women as Leaders in the Migration Process

Women migrants are often more vulnerable than their male counterparts – they face what is called the double disadvantage (of being both women and migrants). However migration, despite its economic and emotional costs, opens up new opportunities even for women who undertake low skill jobs, are undocumented, face discrimination or are exploited. This panel showcases how migrant women have oftentimes managed to turn the odds in their favour and highlight the factors that contribute to their empowerment and leadership.

Role of Women in Conflict and Peacemaking

This panel will explore the various ways in which women are part of contemporary political violence and armed conflict – on the one hand, as victims of gender-based violence and targets of violent extremism, and on the other hand as agents in mediation, peacemaking and transitional justice. It will examine, among other issues: both data on and explanations for gender-based violence; the role of women and girls in the strategies and tactics of violent extremist groups; and the impact of inclusive peace processes that emphasise women’s voices and priorities.

Patricia Sellers, Special Advisor for prosecution strategies to the prosecutor of the International Criminal Court

Violence Against Women in Europe

One in three women in the EU has experienced physical and/or sexual violence since the age of 15; 75 % of women in a professional job or in top management have experienced sexual harassment; one in ten women has experienced sexual harassment or stalking through new technologies. Violence against women is a form of discrimination and a violation of fundamental rights. It is both a cause and a consequence of inequalities between women and men. And as such, deserves central attention in the search for a more equal European Union.

Simona Lanzoni, Member of the Group of Experts on Action against Violence against Women and Domestic Violence (GREVIO)

Women and Political Participation and Mobilization in the EU: Still a Gender Gap?

Gender equality is a fundamental value of the European Union and is considered vital to its economic and socio-political growth. However recent data from the European Institute for Gender Inequality (EIGE) shows that with an average score of 54 (where 1 stands for absolute gender inequality and 100 for full gender equality) the European Union is only halfway towards a gender equal society. This panel will discuss the extent and the causes of the gender gap in one specific dimension: political and social participation in Europe.
The economic crisis and the increased preoccupation with the security of the union appear to be putting men and women back in their place. It is a good moment therefore to rethink and re-evaluate the merits and pitfalls of women’s participation in the EU, both in its conventional form, that is their voting behavior, their participation in political parties, and as candidates in elections; and their non-conventional form, through the participation in protests, social movements, civil society organizations and lobbying at the EU level.

Donatella Campus, Professor at the Department of Political and Social Sciences, University of Bologna

The panel will explore some of the intertwining links between the control of sexuality and reproduction, on the one hand, and the construction of welfare states on the other. It will also examine the influence that recent Catholic doctrines have had on these issues. In light of these considerations the panel will then turn to some contemporary legal debates, paying special attention to reproductive politics in post-socialist states (particularly Romania), to the transformation of fatherhood and masculinities in the jurisprudence of the ECtHR, and to the preconditions for gender recognition in comparative constitutional law.

Showcasing the gender dimension in the work of EUI Alumnae

This session intends to showcase the work of EUI alumnae and to present and discuss their research on women and/or the gender dimension of their work. This broad approach allows us to cover different aspects of the topic, and different case-studies of women EUI alumni and to allow an exposition of their personal and professional point of view. Panellists will be invited to debate the following issues: women’s human rights, domestic violence, women’s participation in European public debate and representation in global media, and women and democracy.

Courtesy of the Charlemagne Prize and the European Parliament.
Live-streamed from Rome, Musei Capitolini. 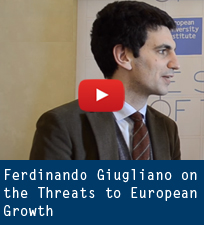 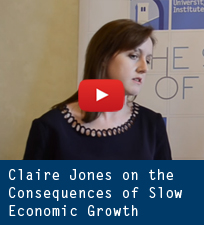 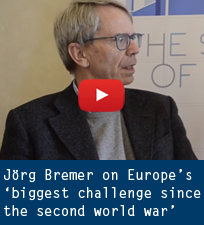