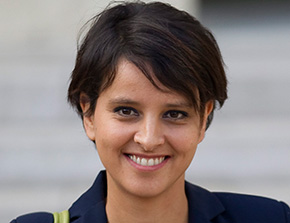 Najat Vallaud-Belkacem has been the French Minister of Education, Higher Education and Research since 2014, and the first woman to ever be appointed to the position in France. A member of the Socialist Party, previously she was Minister of Women’s Affairs in President François Hollande’s cabinet. She was the spokesperson of Ségolène Royal’s campaign during the 2007 French presidential election and again in 2009 for the 2011 French Socialist Party presidential primary. Since 2008, she has been a councillor of the city of Lyon, responsible for major events, youth and community life.