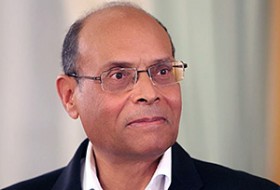 Moncef Marzouki served as President of Tunisia from 2011 to 2014, and was the first democratically elected president of Tunisia after the Revolution in 2011. In 2015, Dr. Marzouki founded the Movement for Popular Citizenship to encourage active citizen participation amongst Tunisians. He has a lifelong career as a human rights activist, doctor and politician. He studied medicine at the University of Strasbourg in France. In Tunisia he founded the Centre for Community Medicine in Sousse and the African Network for Prevention of Child Abuse, and he also joined Tunisian League for Human Rights. He became President of the Arab Commission for Human Rights and since 2011 has served as a member of its Executive Board.