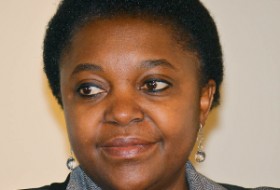 Cécile Kashetu Kyenge is a Congolese-Italian politician, currently serving as Member of the European Parliament. In 2013–2014 she was Minister for Integration, Italy’s first black cabinet minister. A specialist in ophthalmology, she began her political career as town councilor in Modena in 2004, was subsequently elected provincial councilor in 2009 and member of the Chamber of Deputies for the Democratic Party in 2013. She is the founder of Dawa, an intercultural association to promote mutual awareness and cooperation between Italy and Africa, and is the spokesperson of the association March First, promoting the rights of migrants in Italy.