Presentation of the Main Results of the SURVEILLE Project – Part I

The session presents the results of the FP7 project SURVEILLE (Surveillance: Ethical Issues, Legal Limitations, and Efficiency). The presentation covers a multidimensional and multidisciplinary assessment of surveillance technologies used in different contexts.

Presentation of the Main Results of the SURVEILLE Project – Part II

This panel focuses on the results of the legal research strand covered at the EUI in the framework of the SURVEILLE project, on assessing the intrusion into privacy and other fundamental rights through the use of surveillance technologies.

John Mueller, member of the SURVEILLE Advisory board

Organised by the EUI Alumni Association

While most discussions in the EU relating to the financial crisis have thus far been mainly inward-looking, this roundtable discussion will seek to apply an outward-looking focus by exploring the potential for the EU to shape global standards for banking regulation and supervision in international standard-setting fora. It will consider substantive regulatory issues currently under debate internationally; as well as governance aspects such as EU representation and conditions for EU leadership in those fora.

One of the main findings of the SURVEILLE project is that properly addressing the privacy concerns surrounding technology creates a win-win result by improving the technological usability of the product while simultaneously mitigating or eliminating the ethical and human rights concerns. This panel discusses the concept of Privacy by Design and its alternatives.

Georgios Katrougalos, Alternate Minister for Administrative Reforms and Electronic Governance of Greece and Professor of Public Law at Thrace University

Europe’s Role in Peacekeeping and Stabilization

This session examines how European states, both within the United Nations and the emerging architecture of the European Union, have contributed to peacekeeping and stabilization missions. The session examines the effects of particular missions on emerging doctrine and policy (primarily within the Balkans and Africa), as well as Europe’s developing view on conflict prevention, conflict resolution and statebuilding. The panel combines scholars who have examined European foreign policy with practitioners who have been engaged in various aspects of peacebuilding and stabilization.

Technology, Security and Freedom in an Urban Context

This panel focuses on the use of technological innovations in urban security by European local authorities. The SURVEILLE project covers end-user perspectives and has involved a panel of European police officers as well as the European Forum for Urban Security (EFUS). This panel asks how mayors can play a role in the European discussion on security and freedom. Participants will show how their cities make use of new opportunities and technologies to improve the quality of life and the security of citizens.

Guilherme Pinto, Mayor of Matosinhos and President of the EFUS

Leen Verbeek, Vice President of the Congress of Local and Regional Authorities, Council of Europe

Competing Views of Europe? The EU and its Role in the World from the Perspective of the United States, China, Russia, India, and the Middle East

Over the past fifteen years, the EU has emerged as an actor in world politics and has begun to assert itself on the global stage. However, we have little systematic knowledge about how the main powers with whom the EU needs to engage in the international arena view the EU, its interests, goals and capabilities. This session explores how the United States, China, Russia, India, Israel, and the countries of the Middle East perceive the EU’s role and place in the world.

With the explosive spread of the Internet, a major part of our daily activities takes place online. It is thus essential to guarantee security and trustworthiness of the online ecosystem. Today, the security market is growing both in terms of value and strategic importance. The aim of this session is to provide a better understanding of the different players, the dynamics among them, the most frequent business models as well as the rules regulating the sector.
Chair:

Nicklas Lundblad, Senior Director for Public Policy and Government Relations for Europe and the EU, Google

The “Fourth Estate” in the “State of Surveillance”

The publication of the Snowden files by The Guardian has shown how governments are using mass surveillance in a systematic, indiscriminate and unlawful way. Mass surveillance is, on one hand, eroding the role of the watchdogs and, on the other, highlighting the importance of whistleblowing. Journalists now have to find new ways and methods to safeguard their work and function. The aim of the parallel session is to discuss the role of journalism in a mass surveillance scenario.

Mogens Blicher Bjerregård, President of the European Federation of Journalists

Nicklas Lundblad, Senior Director for Public Policy and Government Relations for Europe and the EU, Google

Further information about Globalstat are available at this page.

Statistics play an increasingly vital role in our political and societal life. As a new data gateway to developments in a globalised world, GlobalStat takes up this need and offers statistical information for a sample of 193 UN member states from 1960 to now. By including economic, environmental, political, social, and cultural aspects, GlobalStat supports a ‘beyond GDP perspective’ and ultimately aims to explore the way human beings live, the freedoms they enjoy and the limitations they face.

Miguel Poiares Maduro, Minister in the Cabinet of the Prime Minister and for Regional Development of Portugal 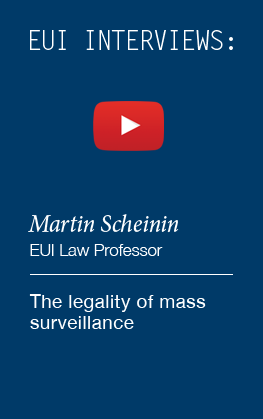